The third card keeps things simple. The club’s progress during the last season is charted on the main graph, supplemented by data for winning, undefeated, winless and losing runs as well as the league table and competition summaries. 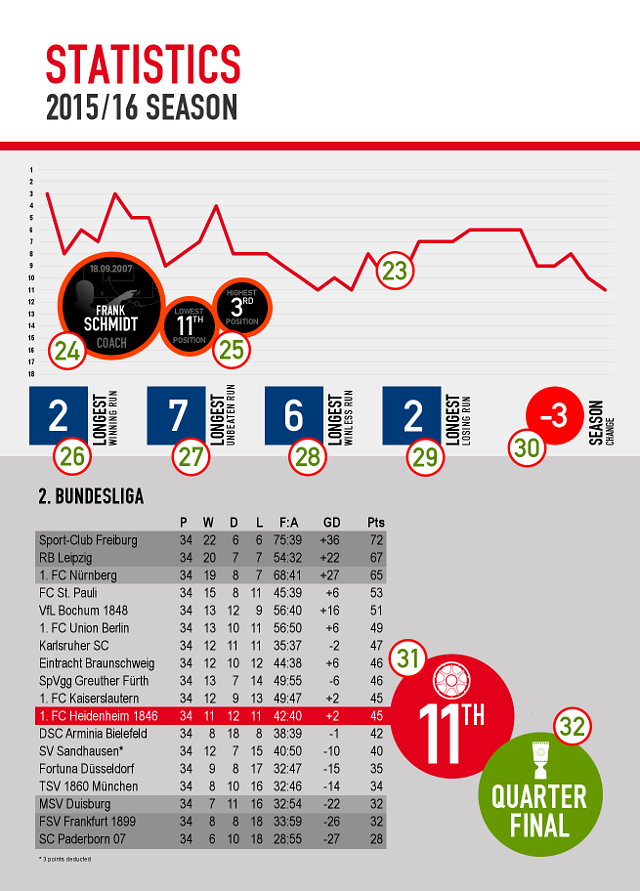 25. Highest/Lowest Position. The highest and lowest league positions attained by the club over the course of the season. Source: fussballdaten.de

27. Longest Unbeaten Run. The longest stretch without defeat during the season. Source: fussballdaten.de

28. Longest Winless Run. The longest series of matches during the season without registering a victory. Source: fussballdaten.de

30. Season Change. The team’s position in the league compared to the previous season, expressed as a “+” or “-“. In those cases where the position was the same, this is indicated by an “=”. When teams have been promoted or relegated this figure cannot be calculated, and is instead indicated by “P” (promoted) or “R” (relegated). Source: fussballdaten.de

31. League table and position. The completed league table (1., 2. Bundesliga or 3. Liga) with a coloured marker indicating the specified club’s final position. Where applicable, there are also details of any promotion/relegation playoff matches. Sources: bundesliga.de, fussballdaten.de