The second and arguably most attractive card provides a more detailed mix of historical data and trivia including international trophies, biggest victories and defeats, player appearance and goalscorer records, German World Cup winners, record transfer fee, words from the club song and the beer sold in the stadium. There is also a little piece of additional trivia – a story or unique record that even fans may not be aware of. 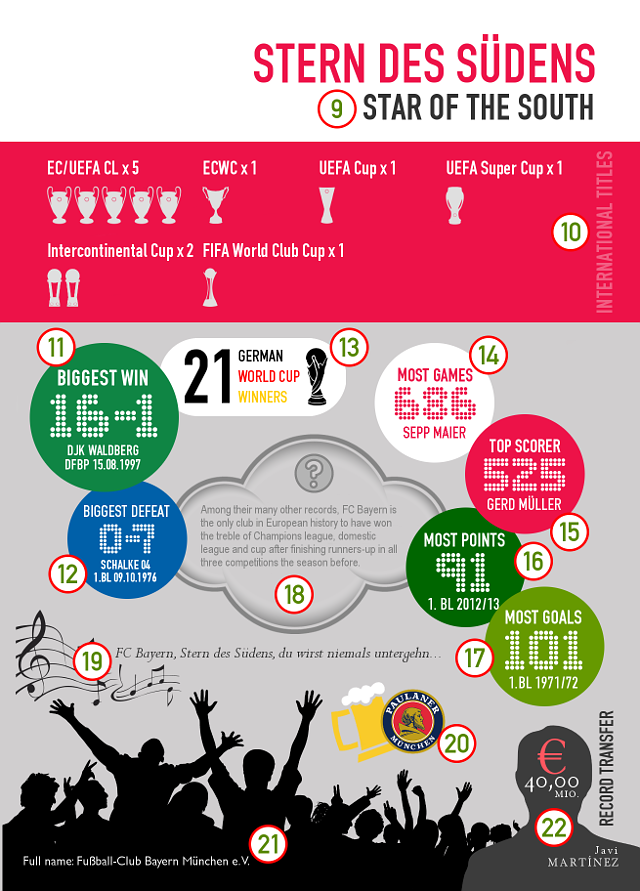 9. Club Nickname. Some Bundesliga clubs have more than one nickname – and in the unique case of SV Sandhausen, none at all – and here I have chosen the most popular one. Sources: club contact, official club website, Wikipedia

10. International Titles. Figures for the UEFA Champions League include the old European Club Champions’ Cup, and the now-defunct European Cup Winners’ Cup are Fairs Cup are also included. Although they are essentially the same thing, the two-team Intercontinental Cup and the current multi-continental FIFA World Club Cup are displayed as separate trophies. Source: transfermarkt.de

11. Biggest Win. The club’s biggest win in all professional competition, from European competition through to the 3. Liga. Source: transfermarkt.de

12. Biggest Defeat. The club’s biggest defeat in all professional tournaments, from Europe through to the 3. Liga. Source: transfermarkt.de

13. German World Cup Winners. While World Cup winners will always be World Cup winners, this number only refers to the status of the player at the time they were part of the World Cup winning squad. For instance World Cup winners Matthias Ginter and Julian Draxler currently play for Borussia Dortmund and VfL Wolfsburg respectively, but at the time of their winning the tournament they were on the books at SC Freiburg and FC Schalke 04. This also makes the management of the numbers easier, meaning that there is no duplication. Source: schwarzundweiss.co.uk

15. Top Scorer. The player registering the highest number of goals for that club, not including pre-season friendlies. Like the “Most Games” figure, I have decided on using transfermarkt.de for gathering this information, with confirmation from the club if possible. Sources: club contact, transfermarkt.de

16. Most Points. The most-ever points collected by the club in one season, but only for the 1. and 2. Bundesliga to avoid over-complicating things and having to look up records for every single regional lower league. All points totals are based on three points for a win, with all records under the previous two points for a win system being adjusted. (Thanks to Herr Frederic Latz at 1. FC Köln for suggesting this idea!) Sources: club contact, transfermarkt.de

17. Most Goals. The most-ever goals scored by the club in one season, but only for the 1. and 2. Bundesliga to avoid over-complicating things and having to look up records for every single regional lower league. Sources: club contact, transfermarkt.de

18. Interesting Fact. A short historical or trivial fact about each club to provide a little contrast to the stream of numbers. Sources: Wikipedia, official club website, fan conversation

20. Stadium Beer. The logo of the beer associated with each club – every Bundesliga club has an “official” brew, available in the stadium. Usually it is a local brand. Source: official club website

21. Full Name. Many German club names as we know them contain a number of abbreviations. For instance, did you know that Karlsruhe SC is in fact Karlsruher Sport-Club Mühlburg-Phönix e. V.? Sources: official club website, Wikipedia

22. Record Transfer. The biggest amount paid by each club, as at 01.06.2016 before the summer transfer window. Source: transfermarkt.de

23. Progress Chart. The progress of each team based on their league position through the season. Source: fussballdaten.de